This guest post is by Jackie Delamatre, who also wrote the post “But will YOU be here?” for Museum Questions in January 2015. Jackie Delamatre is a museum educator. She teaches all ages (from babies to senior citizens) and runs a blog with the goal of connecting kids, parents, and educators to museums: Ms. Museum. 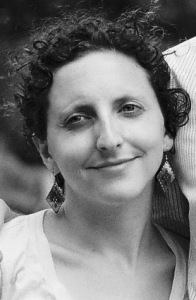 For many years now, museum educators have invested heavily in the belief that people learn by constructing their own knowledge through experience and an exchange of ideas, rather than by what Paulo Freire described as the “banking” concept of education – in which educators believe they can pour knowledge into students’ open minds and it will more or less be transferred unchanged.

This strongly held belief in constructivism is, I think, a great strength of museum education, and despite some skirmishes around the edges (the debate about whether or not and when to offer information, the debate about whether to ask questions), it is fairly consistently applied across institutions. That is, it is consistently applied for children.

For adults, on the other hand, it is anybody’s guess what learning theory, if any, will be applied at any given institution or any given moment. In one institution, you may only be offered a straight lecture-based tour – in which not even questions from participants are encouraged. In another, you may find yourself in a highly constructivist model of education one moment and the next, in a traditional lecture-based tour.

Noting this recently, I have begun to wonder why the approach to adult education is so varied within museums, while the approach to education for younger visitors is so consistent, and what, if anything, we should do about it.

There is an argument to be made that if an institution believes very strongly in a theory of learning, it should offer only programs that align with that theory, especially when the theory appears to be supported by research. If we believe it is good for preschoolers through teenagers to engage in dialogue around objects and ideas, why do we then (largely) drop this dialogue at the point of adulthood? Shouldn’t every age group be offered learning opportunities like those described by John Dewey and Freire in which experience or dialogue is the basis for the formation of knowledge and opinions rather than just the delivery of facts? In which social justice, no less, comes about through a shared meaning-making as opposed to facts delivered from on high? Indeed, Freire speaks mainly about adults in his description of his “problem-posing” education, which is often strikingly close to the dialogic methods of museum education:

They call themselves ignorant and say the professor is the one who has knowledge and to whom they should listen. The criteria of knowledge imposed upon them are the conventional ones. ‘Why don’t you,’ said a peasant participating in a culture circle, ‘explain the pictures first? That way it’ll take less time and won’t give us a headache.’ Almost never do they realize that they, too, ‘know things’ they have learned in their relations with the world and with other women and men. Given the circumstances which have produced their duality, it is only natural that they distrust themselves.[1]

What’s most striking to me about this passage is how familiar that first reaction is from the participant: “Why don’t you explain the pictures first?” I have found that unless adult participants have been set up to anticipate participation in a museum experience, they respond exactly this way – or at least they express this through their body language or reluctance to speak. Anything billed in a museum as a tour garners this reaction. More experimental programs, properly marketed, such as Ways of Looking at the RISD Museum in which visitors look at and discuss one object for an hour, allow visitors to come with more open minds in terms of how they will behave as learners. More casual programs, such as the Gallery Guide program at the Guggenheim in which guards double as educators, allow visitors to converse in a less high-stakes, more informal format. I have found these programs to be immensely successful in applying the constructivist theory to adult education within museums. 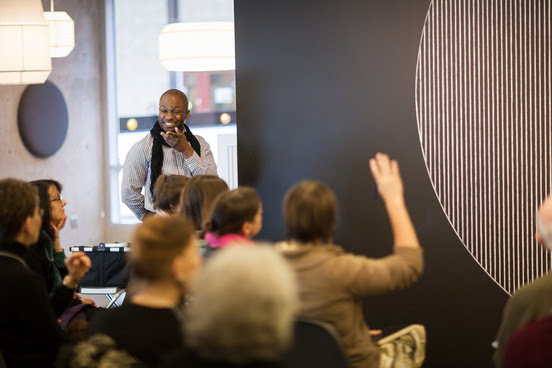 However, after all these years teaching in this participatory, problem-posing, dialogic way with kids, I do not necessarily believe that for adults, the lecture should have no role in education. After all, an adult may come to a museum with the specific goal of gathering facts on an area of interest, and isn’t the lecture the most efficient way to gather facts, or, even better, an expert’s interpretation of the facts?

Last fall, I followed with great interest a debate that unfolded in the New York Times over just this issue. It began in September with an Op-Ed written by Annie Murphy Paul (the sister of a museum educator!), called “Are College Lectures Unfair?” It begins boldly: “Does the college lecture discriminate? Is it biased against undergraduates who are not white, male and affluent?” And goes on to cite research showing that when the lecture format is compared to the “active learning” approach (involving class discussions, guided reading assignments, frequent quizzes), students over all perform better in the latter. But there’s more: In “active learning” courses, women, minorities, and low-income and first-generation students “benefit more, on average, than white males from more affluent, educated families.” As Paul writes:

The act of putting one’s own thoughts into words and communicating them to others, research has shown, is a powerful contributor to learning. Active-learning courses regularly provide opportunities for students to talk and debate with one another in a collaborative, low-pressure environment.

In other words, the research supports constructivist learning approaches as best for college-age learners and especially the kinds of learners many museums purport to want to attract as new audiences. Surely the college-aged learner is close enough developmentally to our adult visitors…Does this mean the lecture-based tour is outdated? Is this the final nail in its coffin?

A month later, a reply to Paul’s Op-Ed appeared in the Times. In her Op-Ed, “Lecture Me. Really,” Molly Worthen, an assistant professor of history at the University of North Carolina, Chapel Hill, argues that lectures are a way of teaching the art of attention and how to absorb a long, complex argument as it unfolds. Lectures, she writes, are an exercise in mindfulness and careful listening that extends beyond the college classroom.

The articles highlighted the debate that is playing out in both formal and informal education. Recently, my new role as Curator of Education at a historic house museum has made me even more committed to determining the best way forward. I will soon have to train new docents in how to give tours to adults. But what will I tell them?

In my conversations with potential visitors I hear the same debate: some love lectures; some can’t stand them. What is going on here? Is the interest in the lecture just a nostalgic clinging to the ways of the past or are we seeing a true split in the population? Perhaps we are seeing a split in preferences for learning styles? Or perhaps this can all be explained by the varying quality of the lecture-based tours? Are the people who love their classic lecture-based tours responding to docents who are great storytellers – a teaching method that can be extremely entertaining and even educational? Or is there something more going on? Perhaps, as Worthen writes, a lecture feels like an escape from this constantly interactive world? Or, as Freire suggests, the participant who feels disenfranchised would rather hear from an expert: “it’ll take less time and won’t give us a headache”?

Perhaps, instead of hewing to a particular learning theory, museums should be making all programs more varied. We have become so singularly focused on teaching children in a constructivist way that we may have tunnel vision. Perhaps each pedagogical approach is best suited to different learning goals. The constructivist approach helps visitors learn how to look and think for themselves. The lecture-based tour, done well, can help visitors absorb an argument and escape into a moment of mindful concentration. (And I am sure there are other approaches that could address still other goals.) Have we experimented enough with storytelling in the galleries, for instance? Or a Montessorri-type approach in which students choose their own stations to explore the objects?

Whatever approaches we use, museums should be clearer about the learning goals and theories they have for visitors of all ages. We may not have to be accountable to teachers, principals, and school systems when we plan for and report on adult learning, but they are learners, too. Making our learning theories and beliefs more transparent is good for both visitors and educators.

[1] Pedagogy of the Oppressed, pg 63. Another passage offers a more concrete example: “… a group of tenement residents discussed a scene showing a drunken man walking on the street and three young men conversing on the corner. The group participants commented that ‘the only one there who is productive and useful to his country is the souse who is returning home after working all day for low wages and who is worried about his family because he can’t take care of their needs. He is the only worker. He is a decent worker and a souse like us.’… imagine the failure of a moralistic educator, sermonizing against alcoholism…” 118-19

2 thoughts on “Adults are Learners, Too”