Last week, I flew to New York City and went on a museum-visiting spree. I visited seven museums over four days, immersing myself in art, taking notes and thinking about new ideas, meeting with colleagues, and re-establishing connections that are more tenuous now that I live 1000 miles away.

Upon my return I found myself thinking, What stuck with me? What exhibits or objects made me keep thinking about them? The answer, for me, is the “Manus x Machina” exhibit at the Metropolitan Museum of Art. Which has led me to wonder, WHY did this exhibit stick with me? I am not usually drawn to fashion exhibits – what is it that works about this exhibition?

The exhibit is on two floors, in the Lehman wing of the Met. The visitor walks in to a domed space made of scaffolding covered with scrim. In that space is a single dress with a long, jeweled train. A detail from the train is projected on the ceiling, and music plays in the background. 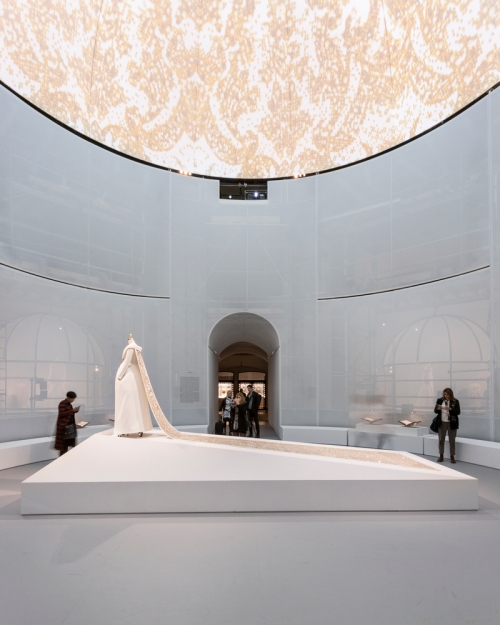 The introductory text (which is hard to find) explains that the exhibit takes its name from a 18th century book that details the tools and hand-skill of arts and crafts. This idea of tools and handwork frames the exhibit, which is broken into sections such as “lace,” “pleating,” and “flowers.” Each section contains examples of handwork and information about the labor and time that goes into it, information about how 20th and 21st century technology has mechanized the process, and objects illustrating how 21st century technology such as 3D printing is leading designers to play with an old idea in new ways.

So – why is this exhibit so successful? What made it so memorable? And how, as a museum professional, can I use these ideas in my own work?

On the blog “Jake’s Bones,” then-12-year-old blogger Jake shared “21 ways how I would create an amazing museum.” Number 5 is “It should have a bit of a wow factor inside.” This is one of of those “well, duh” statements that we may all know, but so often we ignore.

In “Manus x Machina” the wow is created through a scrim set that frames selected dresses, and projects detail from these dresses into domes over the objects. The wow is in the individual environments created: instead of being set against a white wall, the domed objects inhabit their own surreal spaces.

The “wow” is also supported by what the Observer describes as, “hauntingly beautiful music, its pensive melody echoing like a liturgical hymn.”

The music, projections, and fabric structure could easily be distracting, but in this exhibit, it is not. The exhibit design matches form with function, helping visitors identify key objects to look at, and, by separating these objects from the others, leaving space to look closely. The music creates a sense of personal space; in a crowded exhibit, the architecture and music work together to create a space in which visitors can linger and look.

The second half of the exhibit is down a set of stairs, and has none of the “wow” of the earlier design.

The architecture creates a pattern of display with its own set of rules. Once you figure out how to “read” a section, this knowledge leads you through the entry floor of the exhibit: One skill or subject (for example, “feathers,”) per section; one domed object highlighted in each subject, with text describing some of the details of its making; a more general descriptive text somewhere in section; objects lined up on display near that dome with both old and newer approaches to the subject.

I want to stress the importance of this clarity of the display. Rules are important – they help us make sense of a new space. Too often when designers play with sound and display in an exhibit, they vary the rules from one section to the next. I was at the Field Museum recently, and found the exhibit “Evolving Planet” hard to follow, partly because many of the design features varied from gallery to gallery.

Manus x Machina is an idea-driven show, illuminating the relationship between handwork and tools or machines, and demonstrating the value of both. This idea is carried throughout in a way that the lay-person can understand and appreciate.

Early ideas about handwork and tools are illuminated in the first gallery by copies of Diderot’s 18th century encyclopedia on view, turned to various different pages to illustrate the relationship between the fabric arts and tools. Each section shows both hand and machine-made examples of clothing, and occasional videos demonstrate how machines are used in contemporary fashion.

As someone who does not care a great deal about haute couture, the exhibit worked to make me think about the relationship between hand-made and machine-made, the possibilities afforded by new machines, and the idea of tools as machines. It challenged me to broaden my ideas about tools, something which I am currently thinking about in the context of maker-spaces in children’s museums. In other words, the idea was broad enough to allow me to make my own connections and meaning, while narrow enough to be clearly illustrated and teach me new things.

One wonderful example of the new information shared was about the use of flowers in dresses. I had never thought about this as a category of making, and learned a little about how it is done, that it is a specialization within the fashion industry, and the extraordinary amount of time it can take to hand-make flowers for a dress.

Then the exhibit shares how designers are riffing on this specialization. One of the dresses on display, by the designer Christopher Kane, features a repeated flower with its parts labeled, like a text-book illustration. I felt like I “got” the joke. It was extraordinary to see an exhibit include an insider joke, and be capable of transforming the uninformed viewer into someone “in the know” enough to get the joke. Really, one of the biggest criticisms of art museums might be that they often include artwork that comments on previous art, and are rarely able to present it in such a way that makes the art-novice visitor feel on the inside, rather than the outside, of that comment. 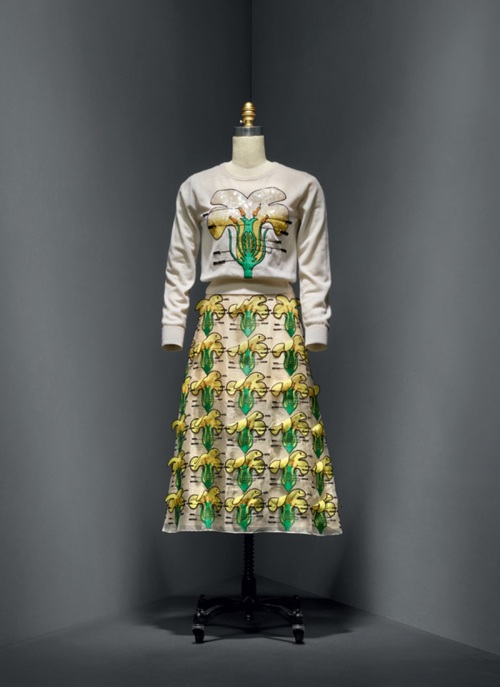 For me, then, there are three things Manus x Machina did that worked:

Arguably, what constitutes success in an exhibit in a major art museum is very different from what constitutes success for an exhibit in a small children’s museum. But there are two reasons to try and apply these ideas from the Met to the Peoria PlayHouse. First, the more I learn about the history of children’s museums, the more I think we have lost something by moving so far away from an object-centered experience. I hope to think more about that in a future post or article. And second, while children are developmentally different from adults, we all exist on the same spectrum of responses. From a very early age (perhaps not infancy, but by 3 or 4), we appreciate the “wow” factor of the spectacular, we appreciate knowing what comes next, and we learn best when we have a context in which to place that learning. (If there are specialists in childhood development who think this is incorrect, please do let me know by commenting on this post or contacting me!)

The PlayHouse is now working on a “Discovery Zone” exhibit – a display of fossils, artifacts, and minerals. We have a concept design, and are now in the fundraising stage. But as we move forward, I will be thinking about the following questions:

3 thoughts on “Exhibition Review: What Works, and Why?”