Interview with Joel Spencer: Maker Spaces and the Reference Interview

Joel Spencer is a native of Champaign, Illinois. Joel graduated from the University of Illinois with a bachelor’s degree in history in 2008, and a master’s degree in library and information science in 2010. While in library school Joel focused on community engagement and teen services, and is now an Adult and Teen Services Librarian at The Urbana Free Library. A large portion of Joel’s work at the library centers around outreach and engagement, particularly through project based technology instruction. 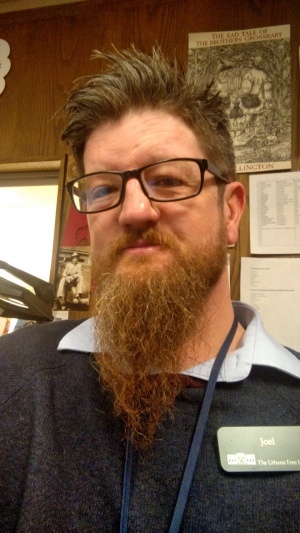 It’s a tool to help a patron narrow the focus of their inquiry. A lot of times people don’t know exactly what it is they are looking for. If you use questions to gain more information, you will confirm with them if where you think they are going is actually useful to them. You do this until you find what it is that they actually need.

Your readers can find a very broad overview of the reference interview here.

How do you use this in Maker space facilitation?

In the Teen Open Lab I find myself using pretty much the same approach as a reference interview. I use “open” and “closed” (yes or no) questions to help teens find something they want to make, and again as they are working through how to make a certain technology work. You have to stop and narrow down why something may not be working, and think about what you might have just learned.

It’s also an approach to creating the space to begin with, developing the program and what kind of tools you are going to have, when you are going to be open, etc. For example, it may not make sense to have everything a Fab Lab would have. When you are creating the program and building your space it is critical that you make sure it is going to be what people actually want through patron input.  This promotes patron ownership and direction. It supports the organic culture you are hoping to foster.

What can maker facilitators learn or borrow from the reference interview?

The idea of narrowing down and clarifying what someone is searching for to make sure you’re starting with the right question. It’s not a series of linear steps. It’s more a group of techniques that you can used together to ensure that you are listening well, and that you understand what people are communicating; give them the opportunity to clarify in their mind what they are looking for.

What if they come in with no ideas about what to make?

I’ve had kids who watched people printing on the 3D printer for months. They didn’t approach us to learn during that time, but they came up with ideas for what you could use a printer to create  When they do come to you they’re more likely to have a pretty fully formed idea. This way they are self-motivated, they have direction, and it’s up to us to help them get there. That difference in approach doesn’t seem like that big a deal but it really is what makes the environment what it is.

You have talked about Maker spaces as a place for doing instead of learning – can you talk more about that?

We are an after school space, so our teens arrive just out of school. All day they sit and learn something that they are being taught through a standard curriculum. If we tried to teach the same way we wouldn’t have an audience.

If you focus on solely on a  learning outcome then you are going to try to teach to that specific outcome; you are going to be focused on what you want to impart to them. This sets up a relationship in which the facilitator has the power, and is piecing out bits of it to teens. If you focus on making instead of learning then the teens are in charge, they are directing the experience.

Also, if you focus on the tools and the technology rather than the patron and their goal, then you run the risk of losing your audience as well. I’m not interested in following the trend of whatever the newest tool is. If it doesn’t make sense in people’s lives, for what they want to accomplish, then it’s not worth doing.

Learning still happens, it is just a by-product. Especially with teens, if they want to do something, it’s hard to stop them. Allow them to do what they want, and in the process they teach themselves, and usually us, how to do it.

The larger goal is to give kids a safe space in which they can feel some agency, some control. There is also the idea that this is a third space, neither home nor school, and it’s supposed to be fun.

You have referenced Paolo Freire and his seminal work Pedagogy of the Oppressed in relation to your work. What does Freire have to do with Maker spaces?

Freire was interested in changing things in a larger social way. We want to do a smaller version of that, where the teens have a place that they have some control over, we can collaborate with them and come up with the space they want to be in, and they can teach each other and teach us. This allows us to step away from being the authority. It gives them an opportunity to become a community, and all of us an opportunity to communicate better.

Museums with Maker spaces – often children’s museums or science centers – tend to have audiences that are younger, and who visit irregularly. What can we learn from what you are doing?

What you do is different in a pretty fundamental way. It seems to me that in a way  museums are presenting technologies in an observational rather than project oriented way. But the approach should be the same. If I were in your position I would contact the schools, talk to the kids about what they are actually interested in. Get as much input as possible from your audience. Let them inform what’s going to be in the space.

I would make the space as hands-on as possible and as well-staffed as possible. Very often we find that no one will come and ask you questions, but if you are walking around and looking someone will raise an eye or sort of raise their hand.

Within the space I would create an informal atmosphere, talking around a table. Start with a conversation. That’s often how great projects get started!

One thought on “How can the reference interview inform Maker spaces? Interview with Joel Spencer”