I recently received an email from a colleague whose staff bring objects into schools for one-hour workshops.  He wrote, “We are encountering a difficulty in that the education team is often requesting 10-15 objects per one-hour workshop. While “diversity of objects” is a great topic, we’re trying to curb down the number of requests to 3-5 well thought out choices.”

Museum professionals want people to look closely at objects.   We hear that people spend mere seconds with a work of art or an important artifact; this seems problematic to many of us. In 2011 Judith Dobrzynski wrote, “The amount of time museum-goers spend looking at each art work is a subject of some study and much conjecture. Many years ago, a museum director told met that the average visitor spent 7 seconds looking at an art work in a museum. A few years ago, I heard that the number had dropped to 2 or 3 seconds.”

Time is limited.  No one will (or can) look at fifty objects for ten minutes each in a single museum experience.  Every time we linger at an object we make a choice: this object is worth more of my time, even though it means I won’t have as much time for something else later.

When structuring an experience for visitors, what is the argument for guiding them to look at five objects carefully instead of fifty quickly? And how do museums encourage the visitor behavior they want?

As I prepare to teach an undergraduate art history survey course this spring, friends and acquaintances tell me that they took a similar course years ago and remember nothing but slides flying by.  Two seconds, or even a minute, per object is not enough to process or make meaning from the object. And without this processing, people do not remember what they looked at.

In an article entitled “Aesthetics and Astronomy: Studying the public’s perception and understanding of imagery from space,” Lisa F. Smith and her colleagues note: “If people do not spend time on the works, it is difficult for there to be a serious level of appreciation or learning.” Similarly, in a 2008 article from American Educator, cognitive scientist Daniel Willingham argues, “What remains in your memory from an experience depends mostly on what you thought about during the experience.” In other words, looking takes time.  That time needs to be spent thinking about what you are looking at.  Without this, you are unlikely to remember much of what you see.

Often articles, didactics, and tour experiences offer a visual analysis.  This is work that museum visitors can do for themselves. But it takes time. 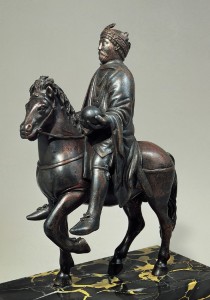 Look at this bronze sculpture for two seconds. Then look at it for another three minutes. What do you notice by the end of the three minutes, that you hadn’t noticed in the first few seconds? What more might you notice if you had another ten minutes to look?

Thinking takes time, too.  And often, for the visitor who is a novice, it takes prompting. Why was this made? How does it fit into its historical context? What makes this object special? What do I think about this object?

Careful observation and extended contemplation are also hallmarks of critical thinking. And they cannot happen in the two seconds the average visitor spends in front of the average object.

Museum exhibitions can feature tens, if not hundreds, of objects. They do this because it is hard to have a sophisticated understanding of an object when it is offered out of context. How can a visitor contemplate how an object fits into its context without knowing that context? How can he or she understand what makes this object special?

When the Metropolitan Museum offered an exhibition about a single work of art Johannes Vermeer’s The Milkmaid, the curators included other paintings by Vermeer, didactics explaining where The Milkmaid belonged in Vermeer’s oeuvre, work by other Dutch artists of the time, and ceramics from the same era similar to those featured in the painting. Thus, what was essentially an experience about a single object became an exhibition with tens of objects. 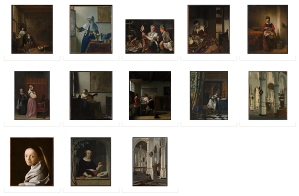 Some of the objects included in the Metropolitan Museum’s exhibition about a single Vermeer painting, “The Milkmaid.”

For a discussion about this object, an educator’s tote might include:

The discussion – which might be ten minutes, or an hour – focuses on a single object. But ten additional objects might be used to provide context.

If both careful looking and broad context are important, how might museums offer both? Should an educator going into a classroom take fifteen objects, or just five? How can museums encourage people to look closely, yet offer a broad context that makes sense of these objects?

One of the great ironies of museum exhibitions is that, by including so many objects, they teach visitors not to look carefully. How can a visitor possibly make it through the Whitney Biennial in a reasonable amount of time if he or she looks carefully?  The Museum of the City of New York’s exhibition about Hurricane Sandy, Rising Waters, boasts “more than 200 color and black-and-white pictures.”  Generously, let us imagine a visitor has two hours to spend in this exhibition. In order to see every picture, the visitor cannot afford much more than 30 seconds per image.

Exhibitions could be smaller. But presumably there are both academic and promotional arguments for any exhibition including hundreds of objects.  Aside from smaller exhibitions, how might exhibitions support close looking?

Exhibitions are often curated in a way which gives every work, or at least many works, equal value.  In order to make it through these exhibitions, visitors are often forced to move quickly. What would it look like to highlight four or five key works?  These would have benches in front of them, so that people could sit and look for an extended period of time. Didactics would be offered in a variety of ways – audio, text panels, brochures – so that people could look and get information at the same time. Supporting objects would be included, but arranged in such a way that visitors were cued that the museum wanted them to look at key works for longer than two seconds. 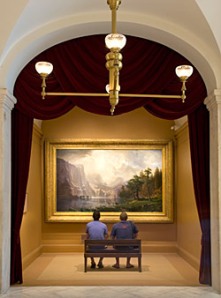 A gallery at the National Museum of American Art featuring Albert Bierstadt’s painting “Among the Sierra Nevada, California”.

Of course, crowded museums lead to logistical problems with careful looking – which is one reason I believe that museums need ways other than visitor numbers to measure success.

In her blog Museum Commons, Gretchen Jennings wrote about a program at the Musee Bonnard, in which participants started in a lecture, which provided context related to a current exhibition. They then went into the galleries for a discussion about a limited number of works of art.  Starting with context allowed for an informed gallery conversation, which everyone could contribute to. It also allowed for a gallery experience that focused in depth on a few works.

Inspired largely by Rika Burnham, Director of Education at The Frick Collection, more and more museums are offering programs that engage visitors in an hour-long exploration of a single work of art.

And for tours, there is always that heavy tote bag, full of images and materials that might help visitors better understand the object.

How else might we teach visitors to look and linger, without compromising the contextual information needed to make an object meaningful?

And Just for Fun

Some museums are experimenting with ways to extend the times visitors look at a work of art.  These don’t relate to providing context or necessarily strategies for careful looking, but they are interesting experiments: 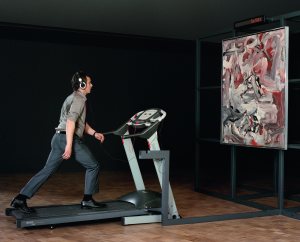 5 thoughts on “Are Ten Objects Better Than One?”

Don't need to be cool to be kind.