Patrick Urich is the City Manager of Peoria, Illinois. As City Manager, he is responsible for overseeing the day-to-day activities of the City of Peoria, including the budget and all city departments and employees. 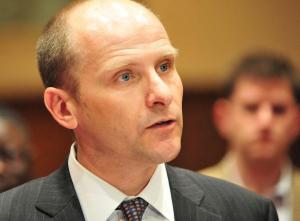 What role do museums play in Peoria?

Museums provide cultural vitality to a community of our size. They provide an experience that is both local and global. They offer some of the experiences that you might find in larger communities.

Museums help to provide an experience for people so that when they come to visit our community, or are moving into this region, they feel like there is a sense of vitality and sense of place and sense of vibrancy. This experience also includes a strong set of neighborhoods with distinct characteristics. A central city that gives you a sense of where you are. Amenities that attract people from a recreational standpoint, so that they are able to ride a bike on a trail, run along the riverfront, walk or play in open spaces. Museums add that spice that is part of what makes a city unique.

One of the ideas put forth in the book Cities, Museums and Soft Power is that museums can challenge the status quo, including the status quo embraced by the city. Thoughts on this?

Museums can certainly play a role in challenging the status quo. In fact, there is no better place than a museum to do that in a small community.

For example, in Peoria, we have a complicated history with Richard Pryor, who is from Peoria, and a similarly complicated history with Peorian Betty Friedan. Museums can help us to rethink these histories, which are not just about these people but about the social structure and inequalities that surrounded them. If museums do more to talk about local experiences and local history in a way that may make people feel uncomfortable, that’s a good thing.

Statue of Richard Pryor by local artist Preston Jackson, unveiled in May 2015

In her interview for this blog, Ngaire Blankenberg claimed that “the big issues of our time, such as migration, climate change, and inequality, happen in cities.” What are these issues in Peoria?

I just came back from a conference of city managers in Seattle, where a city manager from California said: The federal government has the money, state governments have the problems, and cities have the solutions. We are dealing with big, timely issues at the city level – infrastructure and development, environmental issues, income inequality and how we live with one another in a relatively densely populated area. Even though we are a small community of 116,000 people we have all the issues of larger cities, just playing out on a smaller scale. Suburbanization in the north; the challenges of trying to create a vibrant central core; the challenges of delivering education; crime; inequality and economic opportunity.

Museums have to look at where they can challenge the status quo, and where they can push, but also where they can partner. There are opportunities for museums to raise awareness of those issues, and the challenges that they hold for everyone. That helps us to move and change as a community.

But aren’t cities invested in some aspects of the status quo?

Not as much as museums. As Ngaire said in her interview, museums are run by what we might call “the elites” – they are financially supported by a small, wealthy segment of the population. How comfortable are museums – or how comfortable should they be – knowing they are being run by the elites, who are the people who would be most threatened by that challenge to the status quo?

Excellent point. So assuming museums can get past this (admittedly a big assumption for some museums), how might they play a role in these issues?

The easiest one to take as an example is the environmental issue. In Peoria we are facing an issue of Combined Sewer Overflow, and a mandate from the EPA to fix this problem over the next 20 years. It is important to the city to not have storm sewers combined with sanitary sewers, but also there is an impact on the Illinois River and all the communities downstream from us. How do we educate the public on why we have to do this? The Peoria Riverfront Museum has an exhibit dedicated to the Illinois River Experience. There are opportunities to partner to teach people about the environment and clean water.

Where it gets dicier are issues such as income inequality, racial inequality, and educational inequality in a community of our size. How can we work together to have a discussion about those issues? Sometimes if we can use the lens of history to look back, it can help to inform the approach going forward. Museums can help us talk about the past, and how the past has an impact on the events of today.

The Illinois River Experience exhibition at the Peoria Riverfront Museum

You mentioned the Peoria Riverfront Museum (PRM). So let’s look at all of the ways that you are saying this museum might support the city: Serving school groups; contributing to the vitality of the community through unique offerings; helping educate the public about contemporary issues facing Peoria, from the environment to the various forms of inequality present in almost any community. I also know that PRM, having received tax dollars to move downtown a few years ago, faces pressure to bring large numbers of people through their doors, and thus to the “urban core.”

Aren’t these competing priorities? The museum can get – and I assume has gotten – many more visitors through their doors with exhibits like Ripley’s Believe it or Not or animatronic dinosaurs, than it would for a discussion about Combined Sewer Overflow.

A museum like PRM has the ability to do both. You can still have animatronic dinosaurs and Ripley’s. But because you have an area dedicated to the African American Hall of Fame, and you have the history exhibit The Street, you can use those smaller settings to put a community-focused discussion out there concurrently.

That’s asking a lot. A museum, like any other organization, has limited resources. PRM may have the space to do both, but not necessarily the staff and the budget. Pressure on a museum to bring in numbers can result in tension between these numbers and mission.

Museums have a variety of ways they can raise money, admissions funds being only one of those. In fact, on average, admissions fees account for only 5% of revenue for museums. But there is pressure from the city – I would argue the city’s primary goal for the museum – is to get people in the door.  So my concern is that cities exert an influence on museums to focus on numbers rather than mission. Just imagine if the resources directed at bringing in crowd-pleasers were instead aimed at creating an expensive but compelling and exciting exhibit about Combined Sewer Overflow!

Regarding numbers, one of the things to remember with PRM is that Peoria County (at a time when I was County Administrator) was asked to raise taxes to fund the museum’s move downtown. County officials went to the public, put a referendum on the ballot, and sold the benefits of the museum to the public. The public supported the county sales tax increase to support the museum during the bottom of the Great Recession, and the museum was able to get built downtown. And this tax increase was predicated on admissions numbers that never materialized.

The exterior of the Peoria Riverfront Museum, in downtown Peoria

So you are suggesting that museums need to have an honest dialogue with cities, rather than a lobbying stance? That’s an important point, and a useful perspective on how organizations in need of resources often present themselves…

One final question: What are the difficulties for museums and cities in collaborating? Do we speak the same language, and have the same goals?

Museum professionals and those running the day to day operations of cities are more similar than different. They are all professionals, trained in their fields, running mission-driven businesses, with no profit motive but the need to effectively manage the organization. If we had a joint staff retreat, I am sure that we would find many areas in which we could collaborate, cooperate, and find commonality in what we are trying to accomplish for the community as a whole.

3 thoughts on “What role do museums play in a small city? Interview with Patrick Urich”